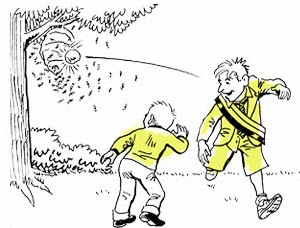 Everything had been going relatively smoothly at Willow Creek over the past couple of years.  The decision to never invoke the name of Bill Hybels had worked.  His victims and their advocates had appeared to fall silent.  Willow could finally move forward.  Sure there was the pandemic, and the choosing of the new senior pastor, Dave Dummitt.  But there was a dull calm on the campus in South Barrington.

That all changed on the evening of May 26.  Boy, did it change.  The problem:  Dave Dummitt and Shawn Williams didn’t realize what they had done.  While they were fist bumping and congratulating one another on how they handled the name that was never ever to be mentioned, the 200 member geriatric core in attendance applauded their performance.  Little did they know they in fact … pick your metaphor:

This is what happened.

Williams claimed to have received the following question from the congregation which he chose to address to those in attendance.  (Mind you, he had to CHOOSE to answer that question and CHOOSE not to answer other questions — I know this because he did not answer the question I texted to him.  That ignored question will be saved for another post).  Here’s the question that Shawn Williams chose to address:

In the 3+ weeks since that meeting, there has been a lot of criticism of Shawn Williams and Dave Dummitt’s infamous 8 minutes on YouTube.  You can find able insightful critiques of their interaction in the following posts:

Before I suggest a more important question that Shawn Williams and Dave Dummitt ought to have answered, I’d like to reflect on the contrast of responses to Dummitt’s and Williams’ reflection on Bill Hybels’ life.

On the one hand, it appeared that all those in attendance enthusiastically affirmed (via widespread applause) the notion of somehow, in some way, at some time, honoring the legacy of Bill Hybels for all that he had done and meant to Willow Creek and the evangelical church across the globe.  Dummitt also made a point of stating that Tom DeVries, the President of the Global Leadership Network (formerly the Willow Creek Association) was in attendance at the Core Meeting as he made his remarks about Hybels.

I ask you:  why did the core of Willow Creek applaud the notion of honoring Hybels, while so many others want to throw up at that idea?

I believe it is because Willow’s remnant core does not know / understand / believe / or appreciate the depth of Bill Hybels’ sin.  They have no idea of the devastating impact of his conduct on his women victims, both named and unnamed.  And why would they?  For three years, ALL of Willow Creek’s leadership, both past and present, told the Willow Creek congregation a different narrative.  They were NEVER told the depth of Bill’s sin.

To this day, Willow Creek leadership has NEVER told the congregation the specifics of Hybels’ heinous conduct. Rather, they fed them and the world a much-sanitized version called “the women’s claims are credible,” without ever saying what exactly those claims against Hybels even were.  They took this mum approach even though Bill Hybels’ women victims described his horrific conduct in graphic detail to multiple groups of elders both past and present.

That’s why I don’t blame the core for applauding the memory of Bill Hybels.  Based on what they were told over the last three years, Bill simply had a “shadow side” — whatever that is (as per Shawn Williams).  And it seems that the leadership at Willow Creek feels that it’s possible, and maybe even honorable, to hold in tension both the incredible worldwide impact that Bill had along with his “shadow side.”

Weighing Hybels’ much-ballyhooed impact on the church against his foggily-referenced “shadow side,” the congregation appears to believe that Bill Hybels has suffered enough — and perhaps now he needs to be celebrated for all that he has meant to the world.

If they feel that way, I suspect it’s because they’ve been deliberately groomed to feel that way —  just as Bill Hybels’ victims were groomed to accept his attentions as vaguely understandable and okay.

A MUCH BETTER QUESTION

Considering all that has been left unsaid, I propose that the question “Why is Bill Hybels’ name rarely mentioned?” is not the most useful question to pose at this point.  Rather, the WCCC congregation, and the public, deserve an honest answer to this question instead:

Again, Willow Creek leadership and GLN leadership have never told the congregation and the world that…

As a result of their silence, the loyal but ill-informed core of the congregation, and the worldwide group of devotees to the Global Leadership Summit, may tend to conclude that poor Bill has become the real victim here. They may feel sorry that such a ground-breaking figure had to retire so suddenly, without any accolades. Wasn’t that punishment enough, they may feel?  As I’ve heard many say, “What more do those women want?”

Naming Bill Hybels’ actual acts of malfeasance would allow everyone to make their own evaluation of how the heights of Hybels’ public achievements compare to the depths of his sexual abuse of so many women.

At this point, Willow Creek’s decision-makers are facing a tough choice:

It seems that they made their choice on May 26, 2021.  But one awkward discussion at that core meeting won’t keep the Bill Hybels issue from hanging over the heads of Willow Creek’s leadership FOREVER if they do not name his sins.

“People who conceal their sins will not prosper, but if they confess and turn from them, they will receive mercy.”  Proverbs 28:13

The “not prospering” part of that verse should also concern GLN’s president, Tom DeVries, who attended the Core Meeting.  His response to the Q & A interchange:  silence.

What do true leaders do when they see — and are a party to — injustice?  They speak up for victims!  They admit their own wrongdoing!  Tom DeVries, Craig Groeschel, please don’t lecture the world about leadership if you won’t defend the abused victims of your founder.  Please don’t tell us how you’ve apologized to the women and have sought reconciliation.  Not one of the women victims is content with the paltry response of either the Willow Creek or GLN leadership.

It’s ironic that Willow Creek Church started a series of messages on Courage soon after the May 26 Core Meeting.  Courage has seemed to be in short supply for the past three years.  Now I say, YES!  Be courageous, Dave Dummitt and Shawn Williams!

Dummitt breathlessly told Williams at the Core meeting on May 26, that he needed to talk about Hybels to the entire congregation on a Sunday morning.  Okay, if this is so right and good and wise, then be COURAGEOUS!  And do it!  Tell the whole congregation your admiring musings about Bill Hybels, the pioneer of so much good in the church. You seem to be expecting an ecstatic response. Will you receive it? Will the people — and the press — welcome the “tension” of a newly revised Bill-Was-Pretty-Great-After-All take on everything?

I would make the same challenge to the GLN frontmen.  Be courageous!  Go ahead and give Bill Hybels a plug at the Global Leadership Summit this year, Craig Groeschel and Tom DeVries.  Invoke his name for all the good he has done.  Honor him for his great legacy.

After all, the applauding core congregation at Willow wants to hear his name, so the GLN crowd will, too, right?  It’s been three years since his absence from the Summit’s world stage.  He has paid a big enough price.  So, go ahead!  Show the courage of your convictions and talk about the positive impact of Bill Hybels on global Christianity.

Give that hornets’ nest another good whack.

Not going there, you say?  Leave Bill to stay in the shadows?  Well, that’s understandable.  After all, do we hear Matt Lauer’s name invoked any more for being such a wonderful early morning TV host?  Where are Hollywood’s accolades for Harvey Weinstein for all of the great movies he produced and the stars he made? Why isn’t Bill Cosby celebrated any more — by anyone — for his transformational comedic genius?

Add Bill Hybels’ name to the list of sexual predators that no one wants to praise any more.  And rightly so.

No, they are not courageous.  They are cowards.