Don’t get me wrong.  Heather Larson and the elders resigning on Wednesday night, August 8, 2018 was a big step forward for the women and Willow Creek.  And I am grateful to God that they did so.  But there is still much work to be done.  There are lots of difficult challenges and choices ahead for Steve Gillen as the interim lead pastor.  We are grateful that he authentically gave hope to Willow Creek this weekend.

One of my first concerns after Bill Hybels resigned and the mantle of ultimate leadership was passed officially to the elders was for the welfare of the congregation.  I attended the first “family meeting” when Bill and the elders declared all allegations against him as lies.  I watched as the congregation breathed a collective sigh of relief standing to their feet, applauding Bill and the elders for a job well done in handling these unwarranted accusations.  Less than three weeks later, the founding pastor of the 42 year old iconic ministry called Willow Creek resigned.  In effect, he has not been heard from since in the ensuing 4 months, except to deny any and all additional charges leveled against him by other women.  Tragic.

I wrote an email to the elders immediately following Bill Hybels’ resignation on April 13, 2018 entitled “An Appeal.”  In it, I sought to warn the elders of the potential congregational devastation that would occur on their watch if they did not humble themselves, come clean and tell the truth immediately.  Below is a short excerpt from that email.  I strongly suggest you read the entire second email.  I wrote to the elders:

You have thousands of people in the congregation that ONLY know what you have told them.  They believe you.  They are on your side in your public portrayal of the events. …

How devastated will those defenders of Bill be if the truth lies in options 2, 3, or 4?  Then, not only is Bill guilty of abusing his power with women, now he and you have perpetuated a lie.

We are now experiencing this congregational devastation in full bloom.  On Wednesday evening I witnessed people in every stage of grief when Heather Larson and the elders resigned. 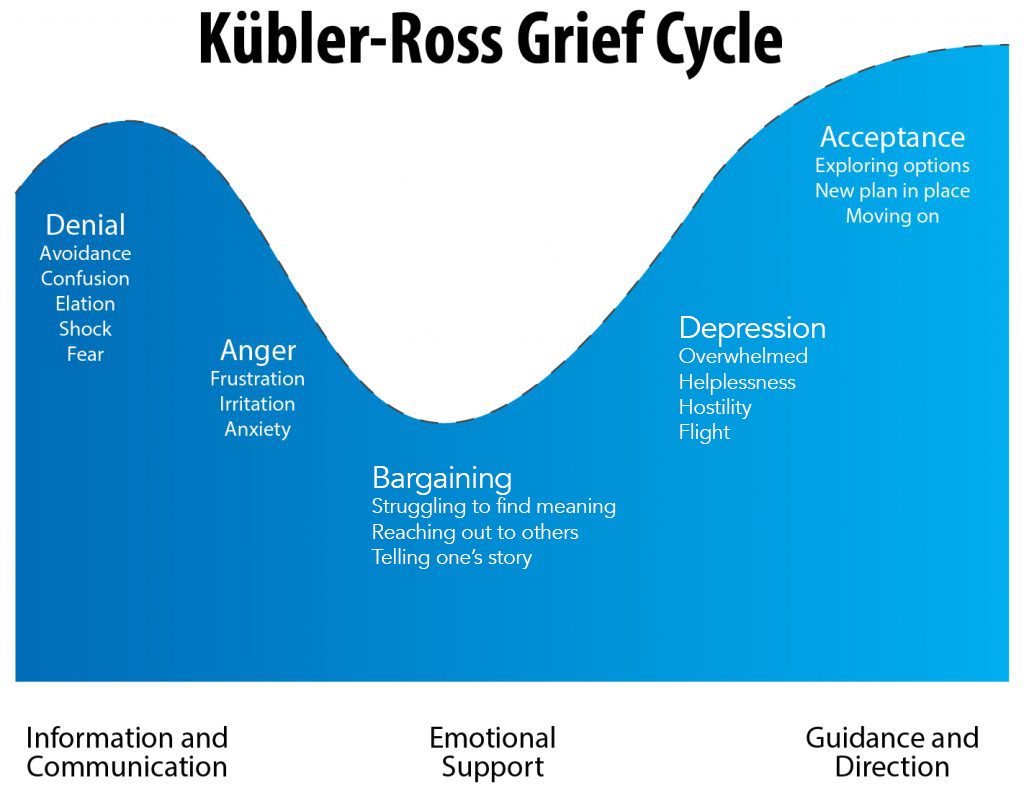 I heard the Denial when congregants yelled, “No!” at Heather’s announcement that she would step down.  Hundreds, if not thousands of the faithful, have kept their heads down, serving as always, trusting, believing, hoping that Heather and the elders had and were handling the Willow tragedy well.  Wednesday evening’s confessions and apologies were a shock to thousands who trusted their leaders.

More than one person expressed their Anger towards me for what I have written.  I sat with advocates for the women at the Wednesday evening Family Meeting.  We were verbally attacked when the meeting was over, being told, “I hope your group is happy now.”  Our group happy?!  I was flabbergasted.  Certainly this individual should know better!  I told her that this was not about groups.  This was about the women and the future of the church.  No apology came our way.  Rather, a retort that “this has been so divisive,” a thinly veiled reference that the women’s advocates have caused this division. She did not see that it was Bill Hybels and Heather Larson and the elders who were at the very core of this congregational division.  The women and their advocates have simply been God’s whistleblowers!

Hundreds, if not a thousand folks, stayed in the auditorium after the resignations to talk and support one another in impromptu small gatherings, to use Kubler-Ross terminology Bargaining with one another.  A healthy and beneficial exercise to make sense of it all.

Others I know, didn’t even come to the meeting, feeling too Depressed, feeling overwhelmed and helpless as to what they viewed as inevitable.

And then there was a contingent of folks who received the news of the resignations with Acceptance.  They knew that this was necessary for the church to move forward.  They knew Willow needed a fresh start with new leadership. They embraced; they shook hands heartily, rejoicing that Wednesday evening was a very good FIRST step for the women and for Willow Creek.

Admittedly, I was a part of this last group.  But I also recognize that NOW the hard work starts.  And much work needs to be done.

Before moving forward, the congregation needs to become unified again.  I believe this is job #1 for Steve Gillen.  The divisions are horrible.  Bill and Heather and the elders are the reasons for this division.  I believe that Mr. Gillen needs to communicate the truth, the whole truth, and nothing but the truth, so help him God.  As difficult as some of the truth is, the truth is what the congregation needs.  There has been so much misinformation shared from the stage and through the Willow website.  Most in the congregation have counted on these outlets to be their sources of “truth.”

That which has been confessed by our former Lead Pastor and former elders needs to be reiterated to those in the congregation that still refuse to believe that what happened on Wednesday evening was anything other than a railroad job.  The congregation must understand that Heather and the elders were not forced out of leadership for no reason. They earned it.  And their resignations were absolutely the right thing to do for the sake of the women and for the welfare of the church.

Mr. Gillen needs to help the congregation navigate through the five messy fluid stages of grief until there is an overall sense of ACCEPTANCE within the congregation.  Each of the stages is represented by thousands for those who call Willow Creek their church home.

Throughout the almost 5 months of public discourse on Willow’s tragedy, other significant concerns have been raised.  Rightfully, nobody has wanted to detract from the main focus, the women’s claims of sexual harassment at the hands of Bill Hybels.  As the confessions and apologies to the women by Willow leadership are now taking place, it is imperative that these other significantly dark issues also be transparently addressed prior to Willow being able to move forward in a healthy manner.

Steve, here is a sampling of issues that we need addressed, and where sin is in the camp, it needs to be rooted out:

Steve, there are many layers to this onion that must be peeled away.  Think: transparency.

Heather stated, “God has helped to give us a clear plan, and we have asked Steve Gillen to step in as interim lead pastor to set up the new pastoral team.”

When a leader resigns due to failing to lead well, that leader does not get to set a plan for the future of the organization.

Everyone hopes that Steve will lead the church well through this transition, but it is not clear what it means when Heather states that Steve will “set up the new pastoral team.”  Has he been assigned to choose the new elders?  Is it his duty to find a new Lead Pastor/Teacher?

By way of reminder, may I also encourage the review of all the ministries at Willow prior to seeking a new senior pastor.  Please see more detail in my post, “For Willow Creek to Survive …”

The first step towards Willow Creek recovering was taken on Wednesday evening, 08/08/18.  It was a big step, a necessary step. There are many more steps to be taken. May we do so humbly, wisely and transparently, depending fully on the Savior who redeemed us and desires to heal our church beyond what we can ask or think (Ephesians 3:20).  We can only hope.

30 thoughts on “Resignations at Willow Creek:  It’s a Start”